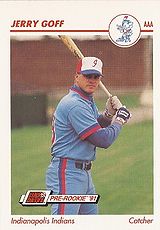 Jerry Goff shares the modern record for most passed balls in one game (6) with Geno Petralli and Rube Vickers; it came in his final major league game, with the Houston Astros against his former team, the Montreal Expos, on May 12, 1996. He also hit a homer off Expos starter Ugueth Urbina in that game.

His first major league homer came in spectacular fashion: on June 26, 1990, playing for the Montreal Expos, he pinch-hit for Dave Schmidt to lead off the top of the 9th against Chicago Cubs closer Les Lancaster at Wrigley Field and homered to put the Expos ahead, 6-5, which was also the game’s final score.

His son Jared, was the starting quarterback for the University of California, Berkeley before being selected first overall by the Los Angeles Rams in the 2016 NFL draft.