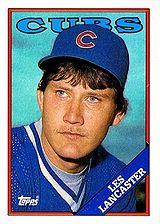 Les Lancaster was signed as an undrafted free agent by the Chicago Cubs and scout Bill Capps. He played seven seasons in the major leagues, including the first five with the Cubs. His best season was 1989 when he went 4-2, 1.36 with 8 saves as the Cubs won the NL East title. He won one game and lost one as the Cubs were defeated by the San Francisco Giants in the 1989 NLCS, the only postseason action of his career.

After his major league career ended, Lancaster played for a time in the independent leagues. In 1996, he went 12-2 with a 3.03 ERA with the Pine Bluff Locomotives of the Big South League en route to being named the circuit's MVP. The following year, with the league's Tupelo Tornado, he went 8-2 with a 2.90 ERA.

After his playing days ended, Lancaster managed in the Northern League with the Adirondack Lumberjacks in 1999 and 2000 and the Lincoln Saltdogs in 2001 and 2002. He later skippered the Reno Silver Sox in the Golden Baseball League, winning a league title in 2006. He became manager of the Sioux City Explorers in 2008.