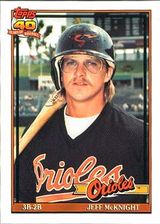 Jeff McKnight played parts of six years in the majors, playing every position except center fielder and pitcher.

The son of big leaguer Jim McKnight, Jeff was selected in the second round (secondary phase) of the January 1983 amateur draft by the New York Mets and signed by scout Joe Mason. He reached the majors with the Mets in 1989, going 3-for-12 in 6 games. After that season, he was released and signed with the Baltimore Orioles. With the O's in 1990, he hit his first big league home run on September 12th, a game-tying shot off Jack Morris of the Detroit Tigers. After two years with Baltimore, he returned to the Mets and played three more summers with them. He later spent two seasons playing in the independent leagues.

McKnight died in 2015 at age 52, following a 10-year battle with leukemia. His brother, Jim, died less than one month before him.