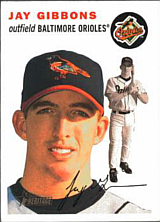 Jay Gibbons was selected by the Toronto Blue Jays in the 14th round of the 1998 amateur draft and that season captured the Pioneer League Triple Crown with the Medicine Hat Blue Jays, hitting .397 with 19 homers and 98 RBI. After the 2000 season, he was picked up by the Baltimore Orioles in the 2000 Rule V Draft. As a rookie, he hit 15 home runs before a hand injury cut short his season. The next year, he hit a career-best 28 homers.

In 2003, "Gibby" had another excellent season. Playing in a career-high 160 games, he established personal bests in batting average and RBI and was voted Team MVP.

Gibbons is reputed to be the nephew of late former Massachusetts Governor Endicott "Chub" Peabody. He will probably be best remembered outside of Baltimore for being the person at the plate during the movie Wedding Crashers.

In September of 2007, SI.com reported that Gibbons received human growth hormone and steroids from Signature Pharmacy in 2005, after MLB had banned HGH use. Baseball officials met with Gibbons following the report. On December 6th, Bud Selig suspended Gibbons for the first 15 days of the 2008 season. After Gibbons hit .189 with no home runs in spring training, he was released by the Orioles shortly before Opening Day 2008. The suspension was later eliminated when MLB issued new steroid policies including amnesty for past offenders.

After not playing in the majors in 2008 and 2009, Gibbons signed with the Los Angeles Dodgers for 2010 and was called up to the big leagues on August 8th when the Dodgers designated Garret Anderson for assignment.