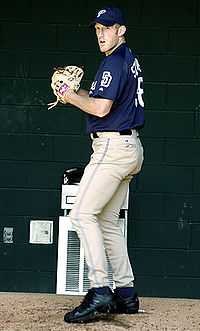 "I’m glad the Cubs took a chance on a guy who got a C in thermo(dynamics)." - Jason Szuminski, joking about how the Cubs drafted him out of MIT

Pitcher Jason Szuminski is the only MIT alumnus to play in the majors (Skip Lockwood and Art Merewether both attended MIT after their baseball careers were over). He had a 3.60 GPA at MIT and received a degree in aerospace engineering. As of 2009 he was at Stanford Business School working on his MBA.

After college graduation, he served in the Air Force. He later was a member of the Air Force Reserve while playing for the San Diego Padres in 2004. He pitched 7 games for the Padres that season. In the minors from 2000 to 2004 he went 26-14 with 11 saves. He had been drafted by the Kansas City Royals in the 2003 Rule V Draft and immediately traded to the Padres in return for Rich Thompson. When he failed to stick with San Diego, he was returned to the Cubs, as he could not be sent down to the minor leagues.

In 2005, Szuminski had shoulder surgery, and he was released by the Chicago Cubs the following spring.