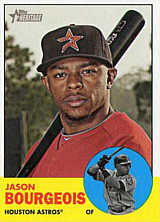 Jason Bourgeois was drafted by the Texas Rangers in the 2nd round of the 2000 amateur draft. He was signed by scout Randy Taylor and made his pro debut that summer. Perhaps the highlight of his big league career was his 2011 season, when he hit .294 with 31 stolen bases in just 93 games for the Houston Astros.

Bourgeois became a coach for the Great Lakes Loons in 2019.