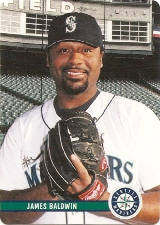 James Baldwin pitched for seven teams during a ten-year major league career. He was drafted by the Chicago White Sox in the fourth round of the 1990 amateur draft and was rated the eighth best prospect in all of baseball by Baseball America in 1994. His repertoire included a strong fastball and a plus curveball, but he was plagued by inconsistency and never quite met the high expectations set early in his career. He finished with a lifetime record of 79-74, an ERA of 5.01 and recorded 844 strikeouts in 1,322 2/3 innings.

Baldwin's early years with the White Sox were plagued with inconsistency. It seemed the talent that earned him accolades during his minor league career was not translating at the major league level, but Baldwin showed flashes of brilliance that tantalized fans and the coaching staff. He finished second in the 1996 Rookie of the Year Award voting, with an 11-6 record and a 4.42 ERA. He fell back to Earth in 1997, finishing the season 12-15 with a 5.27 ERA. When Jerry Manuel took over as White Sox manager in 1998, he tried to motivate "JB" by moving him from the rotation to the bullpen. Baldwin finished the season with a 13-6 record, but his ERA was still too high at 5.32. Baldwin put up similar numbers in 1999, going 12-13 with a 5.10 ERA.

Much like the team as a whole, Baldwin broke out in 2000. He was one of the league's best pitchers in the first half of the season and made the All-Star team with an 11-4 record and a 4.28 ERA. He looked more like his old self in the second half, going 3-3 with a 5.27 ERA. The White Sox started Baldwin in Game 3 of the division series against the Seattle Mariners. He allowed only a single run over six strong innings of work. The White Sox traded him to the Los Angeles Dodgers in 2001, the first of many team changes in his career. He spent 2002 with the Seattle Mariners, starting 23 games and winning 7. He pitched in the Minnesota Twins' bullpen in 2003, made a pair of starts with the New York Mets in 2004, and split time between the Baltimore Orioles and Texas Rangers in 2005, his last season in the bigs.

Baldwin spent time as the pitching coach at his alma mater (2007-2012), where his son, James Baldwin III, was a pitcher and outfielder. The younger Baldwin was drafted by the Los Angeles Dodgers in the 4th round of the 2010 amateur draft. The elder James spent time as a minor league coach with the AZL Reds in 2016-2017, as the 2018 interim pitching coach (4/20-) with the Pensacola Blue Wahoos, and as a rehab coach at their Arizona complex from 2016-2019. He was scheduled to be pitching coach with the Louisville Bats for 2020 before the season was cancelled due to Covid-19.