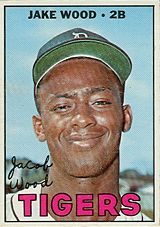 Jake Wood played seven seasons in major league baseball, primarily as a second baseman. He spent his entire career with the Detroit Tigers, except for the 16 last games of his career which were for the Cincinnati Reds in 1967. He was three times third in the American League in stolen bases and also showed moderate power, with his 14 triples in 1961 leading the 1961 American League.

Wood is, through 2008, the first of two major leaguers to come out of Delaware State University. He was in the minors from 1957 to 1960, mostly hitting over .300 at his various stops. As his career wound down, he played in the minors from 1967 to 1969. With the Montgomery Rebels in 1969, he was a teammate of future managers Gene Lamont and Jim Leyland.

One of Wood's claims to fame was setting the single-season record for strikeouts in his rookie year, breaking Jim Lemon's five-year-old mark of 138 with 141. Wood only held the record one year before Harmon Killebrew collected 142 whiffs the following season.