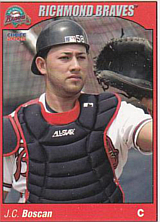 "'Brundy' (Dave Brundage) tells people he didn't mess with me at all because he saw the look on my face when I went in," he [J.C. Boscán] said, a smile creasing his face as he sat in the almost empty clubhouse where his best baseball moment had taken place. "Actually, for a minute he did. The first thing he said when I sat down was 'J.C., you've been playing a long time, haven't you?' For a split second I panicked because I thought he was going to tell me I should feel good about my career but this was the end. Then he said, 'Have you ever been to the big leagues?' That's when I thought maybe this was it because he knew I'd never been. Everyone knew I'd never been. That was when he said 'I was going to mess with you, but I can't,' and he told me I was going up. I'll never forget the words: 'This is your day.' I'm sure I was crying by the time he finished the sentence." - John Feinstein, discussing with J.C. Boscán his first big league call up in the book Where Nobody Knows Your Name

He began 2010 with Gwinnett, hitting .250/.324/.368 in 66 games prior to his September 1, 2010 promotion to the majors. He had hit 5 home runs, his best total in ten years and was fielding .997. He waited a whole month to make his playing debut, as the Braves were locked in a tight race for a postseason slot. He finally got into a game on October 1st, making him the last player to debut in 2010. He drew a walk and scored in his only plate appearance and played an inning behind the plate against the Philadelphia Phillies. Boscán was released after the season to clear a space on the 40-man roster, but was quickly re-signed to a new minor league deal with an invitation to spring training. Back with Gwinnett in 2011, he batted .182/.235/.222 in 61 games. He made four big league appearances, each of them in different months, and connected for his first big league hit with a single off the Florida Marlins' Ricky Nolasco on July 31st. A week later, he went 2-for-4 against the New York Mets and pitcher Dillon Gee in a 6-5 Braves victory. In 2012, he scuffled again in Gwinnett (.189/.264/.284 in 70 games) but saw his personal best 6 games of action as a Brave, batting 2-for-10.

J.C. was again outrighted off the Braves' 40-man roster in 2012, this time striking a minor league pact with the Chicago Cubs. His bat was a little more robust with the Triple A Iowa Cubs, as he batted .232/.297/.270 in 74 games in 2013. The Cubs gave him a six-game look in the majors and he laced his first (and only) extra-base hit, a pinch-hit double off St. Louis Cardinals reliever Edward Mujica, on September 28th. He was outrighted once more after the year. He spent his final two seasons as a pro in a backup catcher capacity, with the Double A Chattanooga Lookouts in the Los Angeles Dodgers organization in 2014 and the Omaha Storm Chasers, the Triple A affiliate of the Kansas City Royals, in 2015.

Boscán is featured briefly in John Feinstein's book about the 2012 Triple A season, Where Nobody Knows Your Name.