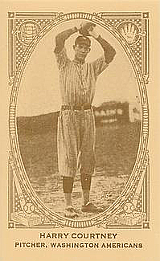 Pitcher Harry Courtney spent parts of four seasons in the big leagues, with a 22-26 record, 4.91 ERA and two shutouts in 94 games. He played primarily with the Washington Senators, dueling for both the MLB and NFL offerings in 1921. Senators owner Clark Griffith discovered Harry's NFL dalliance and ordered him to stop playing or lose his baseball job. Harry complied, then pitched five times in 1922 before being sold to the Chicago White Sox in May; this was his last big league season.