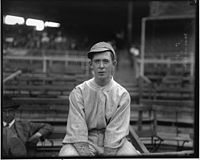 Hal Janvrin, who played semi-pro baseball after high school, was an infielder for the Boston Red Sox, Washington Senators, St. Louis Cardinals and Brooklyn Robins for 10 seasons, and also spent three years in the high minors.

He broke into the majors at age 18 in 1911 with the Boston Red Sox. That season, 23-year-old Tris Speaker was the team's star hitter, and the two top pitchers were 21-year-old "Smokey" Joe Wood and 27-year-old Eddie Cicotte. Two years older than Babe Ruth, Janvrin was a regular on the Red Sox in 1914, playing 145 games, when the Babe was a 19-year-old rookie pitcher on the same Boston team. Tris Speaker was also a teammate for several years.

He was a middle infielder who split his time almost equally between shortstop and second base, while playing first base and third base and outfielder somewhat less often.

A journeyman for the second half of his career, he was on the Washington Senators with Walter Johnson, the St. Louis Cardinals with Rogers Hornsby, and the Brooklyn Robins with Zack Wheat and Burleigh Grimes.

He served in the U.S. Army during World War I. He coached baseball (assistant coach) at Harvard from 1931 to 1934. One of the players he coached was Charlie Devens, who went on to join the New York Yankees and witnessed Babe Ruth's called shot. Janvrin owned a bowling alley in Boston prior to World War II when he served as the civilian head of Rowe's Wharf in Boston for the Department of Civil Defense. Later he worked for the Internal Revenue Service in Boston.

His grandson, Dave Silk, was a member of the USA's "Miracle on Ice" 1980 Olympic gold medal hockey team.