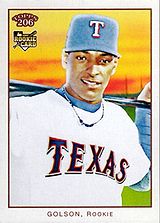 Outfielder Greg Golson was selected by the Philadelphia Phillies in the first round of the 2004 amateur draft. Turning down a scholarship to the University of Texas, he was signed by scout Steve Cohen for $1.475 million and made his pro debut that summer with the GCL Phillies, with whom he hit .295 in 47 games. He spent the next year with the Lakewood Blue Claws, where he hit .264 and stole 25 bases. He split the 2006 season between Lakewood and the Clearwater Threshers, batting .233 with 13 home runs and 30 stolen bases between the two stops. He began 2007 back with Clearwater, where he hit .285 with 12 home runs in 99 games to earn a spot on the Florida State League All-Star team. He was then promoted to the AA Reading Phillies, with whom he hit .242 in 37 games. Golson led the affiliated minors that year with 173 strikeouts.

Golson backed up Andrew McCutchen in left field for the USA in the 2008 Futures Game. He struck out against Julio Pimentel in the 5th and whiffed against Henry Rodríguez three innings later. He made his major league debut later in that year, stealing a base as a pinch runner on September 3, 2008. He went 0 for 6 then after the season was traded to the Texas Rangers in return for OF John Mayberry. However he played only one game for Texas in 2009 and was traded to the New York Yankees before the 2010 season. He got most of his major league playing time with the Yankees, going 6 for 23 (.261) in 24 games that season, then played another 9 games for them in 2011. Hes spend most of those two years with the AAA Scranton/Wilkes-Barre Yankees, however, playing over 100 years both seasons. He moved to the Charlotte Knights, in the Chicago White Sox organization, in 2012, then was with four different minor league teams, including time in AA for the first time since 2008, and in the independent leagues, in 2013.