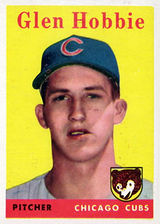 19-year-old righthander Glen Hobbie was signed by the Chicago Cubs as an amateur free agent before the 1955 season. He spent part of his first year in the pros with the Superior Blues of the Northern League going 2-4 and the rest of this first season with the Charleston Senators of the American Association going 0-4 for a 2-8 combined record with a 4.00 ERA. He played the same way in 1956, going 8-2 with the Dubuque Packers of the Midwest League and capped it off by going 0-2 with the Duluth-Superior White Sox of the Northern League for a 8-4 record and a 5.24 ERA in his second year.

After going 15-15 plus a 3.92 ERA with the Memphis Chickasaws of the AA Southern Association in 1957, he was invited to Wrigley Field, possibly arriving in a wind storm as he pitched 4 innings in 2 outings and had a 10.38 ERA to show for his time. But Glen gutted it out and remained with the Cubs until being traded to the St. Louis Cardinals on June 2. 1964, in return for Lew Burdette.

Hobbie won 16 games in both 1959 and 1960 for Chicago with one of those victories in 1959 a 1-0 one-hitter over St. Louis in which he retired the first 20 Cardinals until Stan Musial broke up his bid for a perfect game with a two-out double in the 7th inning. Although Glen lost a National League-leading 20 games and matched that by giving up 114 earned runs in 1960, he also won 16 games with 4 shutouts and 16 complete games.

Glen, who hit four homers in his big league career, blasted two of them in the same game on July 2, 1961. Hobbie went 1-2 for the Cardinals in 1964 and a badly strained shoulder led to a premature end of his major league mound career at age 28 that year, preventing him from pitching for the Cards in the 1964 World Series. Hobbie spent 8 seasons in the majors altogether and had a 62-81 record and a 4.20 ERA to show for it.

Hobbie finished out his pro baseball career with the Syracuse Chiefs of the International League in 1965 and his minor league record showed 38 wins and 36 losses with a 4.25 ERA in all or parts of five seasons. After baseball, he was the plant supervisor for the Roller Derby Skate Company in Litchfield, Illinois. He died in 2013 at age 77.