Note: This page is for Gary Ross, major league pitcher from 1968-1977. For others with the same name click here 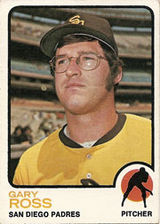 Pitcher Gary Ross played a decade in the majors. His son Gary Ross Jr. pitched in the minors.

Originally selected by the Atlanta Braves in the 33rd round of the 1966 amateur draft after high school, Ross did not sign and was then selected by the Chicago Cubs in the secondary phase of the January 1967 amateur draft. He reached the majors with the team in 1968, going 1-1 with a 4.17 ERA in 13 games. He made the Cubs' Opening Day roster in 1969 but, after just two appearances, was dealt to the expansion San Diego Padres along with Joe Niekro and Frankie Libran for Dick Selma. He won his first decision with the Padres but then lost his next 11. Despite an unfortunate 3-12 record for San Diego that year, he posted a respectable 4.19 ERA with the club.

Ross remained with the Padres organization through 1975, when he was dealt to the California Angels late in the season. He was a member of the Angels rotation in 1976, going 8-16 in spite of a 3.00 ERA. He played one more year with the team before ending his career.