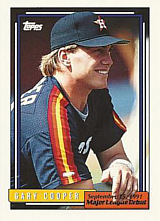 The second of the big league Gary Coopers, third baseman Gary Cooper appeared in nine games with the Houston Astros in 1991, batting .250/.368/.313 while pushing Ken Caminiti to the bench for three starts. In the minors during the four year period after his lone big league appearances, 1992 to 1995, he got on base at a .378 clip with a .491 slugging percentage. His time at BYU overlapped with that of Wally Joyner and Cory Snyder.