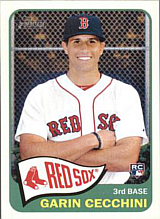 The brother of Gavin Cecchini, third baseman Garin Cecchini was selected by the Boston Red Sox in the fourth round of the 2010 amateur draft despite not playing his senior year in high school due to injury. Scouted by Matt Dorey, he was signed at the deadline for a reported $1.31 million. He made his pro debut in 2011 with the Lowell Spinners, hitting .298 with 12 doubles in 32 games before being sidelined for the remainder of the year with another injury. He recovered and began 2012 with the Greenville Drive.

Garin made his major league debut on June 1, 2014 for the Red Sox against the Tampa Bay Rays. He came into the game after second baseman Dustin Pedroia was ejected in the 4th inning, playing third base while Jonathan Herrera moved from third to second. He was called out on strikes against Erik Bedard in his first big league at-bat leading off the 5th, then doubled to left off Juan Carlos Oviedo in the 7th, driving in a run, for his first big league hit. His big league tenure was brief, comprised of 13 games between 2014 and 2015, hitting .229 with a home run and 6 runs scored in 35 at bats.