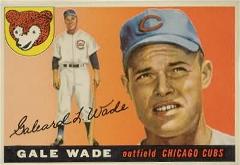 Gale Wade was signed as an amateur free agent by the Brooklyn Dodgers before the 1947 season. In his first season out with the Ponca City Dodgers of the class D Kansas-Oklahoma-Missouri League, the 18-year-old Gale was a two-way player, pitching 181 innings in 28 games and building a 10-9 record with a 5.32 ERA. He also appeared in 59 games as an outfielder, hitting for a .318 average. The Dodgers organization felt that Gale, with his swift speed and solid bat, would be more valuable to them as an outfielder and that is where he spent the rest of his pro baseball career. Wade went on to lead four different leagues in stolen bases during his minor league career.

Wade was with the Dodgers organization through the 1953 season, hitting .314 in 113 games with the Fort Worth Cats of the Texas League that year. The Cleveland Indians purchased him from the Dodgers on October 1st. Wade spent the 1954 season with the Indianapolis Indians of the American Association, hitting .273 in 116 games and on November 30th, he was sent to the Chicago Cubs to complete an earlier transaction that involved two big names, future Hall of Famer Ralph Kiner, who headed to Cleveland, and pitcher Sam Jones, who accompanied Gale to the Windy City.

He made his major league debut with the Cubs on April 11, 1955 and appeared in nine games in the majors that year, hitting .182; he spent the rest of the year with the Los Angeles Angels of the Pacific Coast League and the Toledo Mud Hens of the American Association, having a combined .301 hitting average and eight home runs. Gale got a second chance with the Cubs in 1956, appearing in just 10 games with 12 at-bats and no hits. This ended his big league career with a .133 hitting average in 19 games.

Wade spent the next six seasons (1956-1961) in the Pacific Coast League and American Association with his best year coming in 1956, when he hit .292 with 20 home runs in 101 games for the Los Angeles Angels. Gale finished up his 15-year minor league career with the Dallas-Fort Worth Rangers in 1961 with a minor league career hitting average of .279 with 100 home runs in 5,446 at-bats.

After baseball Wade lived and worked in Nebo, North Carolina, where he was an electrician and district manager for a rural electricity co-op.