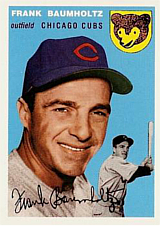 "The Cardinals and us were both out of the race that year and we played the last game of the season in St. Louis. None of us knew that Eddie Stanky, the Cardinals manager, had worked up a deal with the press that Musial was going to pitch to me. I was the lead-off hitter for the Cubs."

"Harvey Haddix was announced as their pitcher and Musial was playing center field and Solly Hemus was their third baseman. When it was time to play ball, Stanky came out of the dugout and called time and brought in Musial to warm up. Phil Cavarretta our manager, came out to the plate to talk to me. He said: 'It looks like Musial is going to pitch to you.' I said, 'I'm going to bat right-handed if he does.' Cavarretta responded: 'Did you ever bat right-handed?' 'No, I never swung the bat right-handed in my life,' I answered. Phil said: 'If you don't bat right-handed you don't have a gut in your body!'"

"Well, I did. He threw one pitch and I hit a low line drive that hit Hemus on the right shin and rolled down in the left field corner. I ended up on second base and they flashed the error sign on the board. Then Stanky came out and had Musial go back to center field and brought Haddix in to pitch." - Frank Baumholtz, remembering facing Stan Musial in the height of the batting title race during the 1952 season

The first athlete to play both professional baseball and basketball, Frankie Baumholtz was with Youngstown in the National Professional Basketball Conference (NPBC) during the 1945-46 season. The following year he played for the Cleveland Rebels of the Basketball Association of America (B.A.A.), a league that was a forerunner to the NBA.

A star athlete with the Ohio Bobcats in the late 1930s who served four years in the Navy during World War II, the 29-year-old rookie outfielder hit .238 for the Cincinnati Reds in 1947. He improved to .296 in 1948, but slumped after being traded to the Chicago Cubs in 1949 and was sent to the Pacific Coast League's Los Angeles Angels. There, he won the 1950 PCL batting title with a .379 average. He returned to the Cubs and finished second to Stan Musial of the St. Louis Cardinals in the 1952 batting race, hitting .325. Ironically, he was the only batter to ever face Musial, the pitcher, in a big league game, reaching first base on an infield error.

Frankie was sold to the Philadelphia Phillies in December 1955 and led the National League in pinch hits in 1955 with the Cubs and 1956 with the Phils. Of players with at least 150 at-bats as a pinch hitter, Frankie is the only left-handed batter to have over a .300 average in the role (47 for 153, .307). Overall, Baumholtz was in professional baseball from 1941 until 1957. His four years of military service cut his playing years down to 13, of which only four where spent in the minors, where he hit for a solid .321 average. A genuine contact hitter who didn't homer, walk or strike out much, Frankie's playing days ended in 1957 with a very creditable major league .290 lifetime mark.

He resided in Cleveland where he was a vice president for the Marquardt Brothers Food Company, prior to his death on December 14, 1997, at age 79 in Winter Springs, FL.