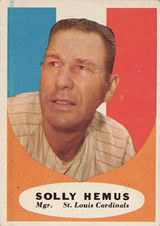 Despite not becoming a regular player until age 28, infielder Solly Hemus logged eleven seasons in the majors, hitting a career .273, with moderate power, a good eye at the plate and ability to get on base. He led the league once in runs scored and three times in hit-by-pitch. He finished his major league career with a stunning 39 percent on-base-percentage.