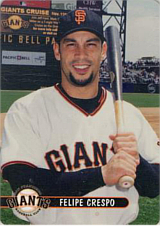 Felipe Crespo was an infielder-outfielder who made the playoffs with the San Francisco Giants, was involved in a statistical quirk and played in Japan.

Crespo was drafted by the Toronto Blue Jays in the 3rd round (95th overall) of the 1990 amateur draft. The Puerto Rican infielder-outfielder advanced at a steady pace through the Blue Jays' farm system, showing a good average and eye and some power. His final minor league numbers were .283/~.378/.443. In 1996, Crespo looked like a lock at second base to start the season for the Jays but suffered an injury. [1]

Crespo reached the majors in 1996, but only played in 22 games, batting .184 in 49 at bats. He played ten games at second base, six games at third base, and two games at first base. In 1997 he split time between the Blue Jays and the AAA Syracuse Sky Chiefs. With the Blue Jays, he played seven games at third base, two at DH and one at second base. The 1998 season saw Crespo playing predominantly in the outfield (25 games in right field, 19 in left field, 10 in the infield). He finished with an adequate line of .262/.342/.362 in 66 games. In spring training 1999, he was released and signed a month later with the San Francisco Giants.

Crespo was traded to the Philadelphia Phillies on July 27 for former closer Wayne Gomes. Despite his .197 average with the Giants, Crespo was one of the top pinch-hitters that season. He was 10-for-43 in the role with three doubles, two homers homers and seven RBI while drawing six walks. Crespo continued to serve as a pinch-hitter for the Phillies, with 44 at bats in 33 games, hitting only .171/.234/.293. His poor hitting may have been caused by plantar fasciitis, a painful foot injury for which he was placed on the disabled list by the Giants in April. [2]

For the 2002 season, Crespo joined the Yomiuri Giants of Nippon Pro Baseball. He continued to hit poorly, hitting .122 with a .533 OPS in only 24 games. Crespo returned to America in 2003, earning an invitation to spring training with the Cincinnati Reds. He went 2-for-8 with an RBI in the Grapefruit League, then spent the rest of the season at AAA Louisville, hitting .244/.330/.350. In 2004, Crespo was a non-roster invitee with the Florida Marlins in spring training. He went 1 for 6 with a run scored and, when the Marlins reassigned him to the minor league camp, he retired. [3]

Felipe later ran a real estate business in his hometown, Caguas, Puerto Rico. He played in the country's winter league with the Caguas Creoles, Carolina Giants and Santurce Crabbers.