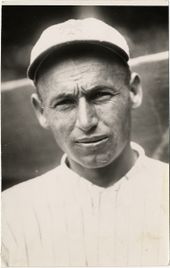 Eddie Brown had some success in the majors, leading the NL in hits in 1926 and twice leading the league in games played. He was a backup for the New York Giants when they won the World Series in 1921 and was a regular with the Brooklyn Robins who finished in second place in 1924. Most of his managers in the majors were eventual Hall of Famers, such as John McGraw, Wilbert Robinson, Dave Bancroft and Rogers Hornsby. When he played for the Boston Braves in 1928, he was one year older than teammate George Sisler, and four years older than teammate (and manager) Hornsby. In 790 games as a big leaguer, he batted .303/.334/.400.

Among players who have come out of Syracuse, he is the one with the most at-bats (as of 2019). He came to the majors at age 29, after a minor league career which started in 1913. After he made his major league debut with the Giants near the end of the 1920 season, and played for the Giants in 1921, he went back to the minors for all of 1922 and 1923, and part of 1924. He had by far the highest batting average for the 1923 Indianapolis Indians. After his major league days, he continued to play into his 40s in the minors.