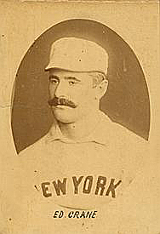 "Ed Crane, fat and jolly, went into the pitcher's box for New York... Ed shot them in with terrific speed and brought joy to the New Yorkers, who saw the Grooms succumb, one after another, to his invincible 'curves' and 'shoots'." - The World, October 1889

Ed Crane, known as "Cannonball" and "Hercules", was one of the hardest throwing and strongest pitchers of his day. It was said that he was able to toss a baseball 135 yards, farther than anyone in his heyday. He played nine big league seasons, becoming the first man in history to strike out four men in one inning.

He started out as primarily a position player in the 1884 Union Association with the Boston Reds. He finished second in the league with 12 home runs before the league closed its doors. Ed moved to the National League and hit well in 1885, splitting time between the Providence Grays and Buffalo Bisons. When he hit poorly with the Washington Nationals in 1886, he became primarily a pitcher thereafter. On the mound, he usually had losing records although his ERA was better than average in several years. On October 4, 1888, pitching for the New York Giants, he became the first man to strike out four batters in an inning, wasting Fred Pfeffer, Ned Williamson, Tom Burns and John Tener in the 5th inning of a game with the Chicago White Stockings.

Ed struggled with control both on the mound, twice walking more than 100 hitters in a season, and off the field. While on Al Spalding's world tour in the 1889-1890 off-season, he developed a taste for hard liquor. He was able to lead the American Association in ERA in 1891, posting a 2.45 mark in the loop's last year. But he was finished in the bigs just two years later, after splitting the 1893 season between the Giants and the Brooklyn Grooms. Ed kicked around as a pitcher until 1896, and was even an Eastern League umpire for part of 1896 (earlier umpiring four NL games in 1892 and one in 1893). But his drinking was out of control and he was let go in June. After a three-month routine of traveling the country working odd jobs paired with drinking to excess, Crane was found dead in his bed in a Rochester hotel on September 20, 1896.