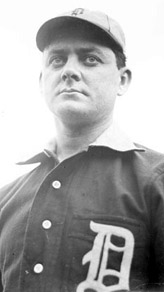 "President Dreyfuss, of Louisville, came to town last Wednesday and made a dead set to get Cooley and cash in exchange for Magee. Messrs. Reach and Rogers, however, wisely refused to listen to any suggestion involving the transfer of so valuable a player as Cooley." - Sporting Life, July 8, 1899

Duff, who was never called "Duff Man" during his career (but rather 'Dick Cooley' by Sporting Life) was only the second man from Kansas to break into the bigs, becoming one of the most prolific Kansans along the way. After doing some player-managing with the Topeka Populists of the Western League, he came up with the St. Louis Browns in 1893, batting .346 in a 29-game look. Facing the Boston Beaneaters that September 30th, Duff had a 6-for-6 day with a double and a triple. His first full season came in 1895, when he hit .342/.386/.466 with 108 runs scored, leading the Brownies in batting average, runs scored, triples (20) and hits (194). He moved to the Philadelphia Phillies in the middle of the following season, leading the team in runs scored in back-to-back years (1897 and 1898) while coming home to score a combined 247 times.

The Pittsburgh Pirates purchased Duff for $1,000 for the 1900 season and he struggled mightily, hitting only .201 in 66 games. He was purchased by the Boston Beaneaters before 1901; they made him earn his way back up following a mighty showing for the Syracuse Stars. He returned to regular status in 1902, sticking in Boston until 1904. He became the second player in club history to hit for the cycle, doing so in the second half of a doubleheader against the Phillies on June 20, 1904, driving in six runs as part of a 9-0 beatdown. Duff finished his career with the Detroit Tigers in 1905. It was his broken leg towards the tail end of the season that freed center field for an 18-year-old named Ty Cobb to crack the lineup.

Cooley managed for 10 years. He began as a lad in Topeka the year he broke into the bigs. He also managed there, for the Topeka Jayhawks, from 1909-1910. In 1900, in between his struggles with the Pirates, he managed the Philadelphia Athletics of the Atlantic League. From 1906 through 1908 and 1914, he again managed at Topeka. In 1911, he split his time between Topeka (Western League) and the Salt Lake City Skyscrapers (Union Association). He ended his managerial career in 1922 back at Topeka in the Southwestern League. His minor league career ran from 1893-1909, although years later while manager he put himself in at age 49 for some games.

Duff battled alcoholism later in life, dying from heat stroke in Dallas at 64.