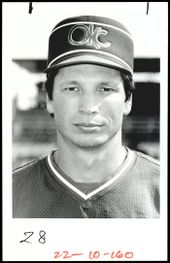 But he still had great stuff and teams were willing to give him other opportunities. On December 5, 1988, he was included in a blockbuster trade with the Texas Rangers, joining Jamie Moyer and Rafael Palmeiro in return for six players including Steve Wilson, Curtis Wilkerson and Mitch Williams, all key contributors to the Cubs' surprise 1989 division title. He had his best year with Texas in 1989, going 2-1, 3.70 in 38 games, but that belied some serious control issues, with 33 walks in 58 1/3 innings. The following spring, in 1990, he was traded to the Montreal Expos in return for rookie infielder Jeff Huson and was looked upon as a potential closer. However, he couldn't get his stuff under control, issuing another 29 walks in 58 1/3 innings, while going 4-7, 5.09 with 3 saves. He never pitched again in the majors after that. He continued to pitch in the minor leagues until 1994.