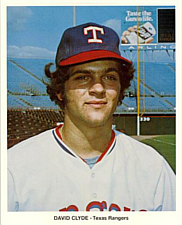 "The correlation I felt was like going from high school to performing open heart surgery. I felt that's how much better I had to be." - David Clyde, August 2003, to Baseball Digest

David Clyde burst into the big leagues as one of the most heralded pitching prospects of all-time. Tasked with becoming the Texas Rangers savior and marquee player fresh out of high school, he was out of the game at 26.

Clyde was taken first overall by the Rangers in the 1973 amateur draft. Plucked from a high school in nearby Houston, he had merely been 18-0 with a 0.18 ERA in 148 innings as a senior with five no-hitters. He had been billed as the second coming of Sandy Koufax and signed for an $125,000 bonus and a free college education. Bob Short, the Rangers owner, added a provision designed more to fatten his wallet than help David excel. With the Rangers muddled in attendance woes and a local boy entering the fold who could butts in seats, it was agreed David would make his first two appearances as a professional on a big league mound, then report to the minors. Nothing could possibly go wrong with this plan.

Less than three weeks after his final high school game, Clyde debuted on June 27, 1973, against the Minnesota Twins. He pitched five innings of one-hit ball and struck out 8 Twins (walking 7) to pick up the win. The one hit was a two-run homer by Mike Adams. After walking the first two batters he faced (Jerry Terrell and Rod Carew), Clyde struck out Bobby Darwin, George Mitterwald and Joe Lis in succession. He was the last pitcher 21-or-younger to strike out 8 or more in his debut until Jose Fernandez did so on April 7, 2013. In his second start, David hung in the box for six innings, allowing three runs (one earned) and striking out 6 Chicago White Sox in a no decision. It was now time for him to go the minors. But Rangers brass felt otherwise. With large turnouts for both games at Arlington Stadium, Clyde stuck around for the rest of the season. He made 18 starts, pitched 93 1/3 innings and finished 4-8 with a 5.01 ERA.

Now 19, it would have been beneficial for David to head to the minors and get himself better acquainted with the pro game. Once again, this did not happen. He spent the 1974 season entirely in Texas, starting hot with a 3-0 record and 2.43 ERA through 6 starts. He ultimately pitched 28 times, with 21 starts, and did not win again, finishing 3-9 with a 4.38 ERA in 117 innings. Bob Short, cashing in on David's appeal at the gate, was able to get out of the ownership racket, selling the team to Brad Corbett while David was floundering. In 1975, the inevitable happened. David injured his shoulder, spending much of the season when he was not hurt back in the minors trying to find some semblance of what made him great in high school. He was up for one start, allowing three runs (two earned) to the California Angels in seven innings in Arlington. Shoulder surgery and two seasons in the minors followed. After two tough seasons back on the farm, the Rangers gave up on him, passing him off to the Cleveland Indians in a deal in February 1978.

In 1978, David set highs for innings pitched (153 1/3), starts (25) and complete games (5). His first start was a dandy, allowing two runs and four hits in a complete game victory against the Oakland Athletics on May 16th. Eleven days later, he shone again, allowing two runs (one earned) on seven hits at Memorial Stadium to defeat the Baltimore Orioles. He finished the game with a 3-0, 1.36 record. It soon unraveled, as he ended the season 8-11, 4.28. He pitched nine times the next season, 1979, went 3-4 with a 5.91 ERA, and tore his rotator cuff, ending his big league career. A deal back to Texas proved unhelpful as his shoulder crapped out a second time. While his career could have been thriving, he hung up his spikes, following a 10-10 season with two teams in the Houston Astros organization in 1981.

All told, the 18-year-old phenom ultimately won only 18 games, finishing 18-33 with a 4.63 ERA in 84 games. Baseball Digest, catching up with Clyde in August 2003, indicated that he may have hurt himself in the majors by linking up with some veterans who liked to party. While his debut and early days helped put Dallas on the map as a baseball town, this was little comfort to him, as it came with the heavy cost of not having a successful and thriving career.

Clyde's nephew, Garrett Clyde, was drafted by the Chicago Cubs in 2007. Another nephew, Grant (Garrett's brother), was an infielder for NC State in 2013.