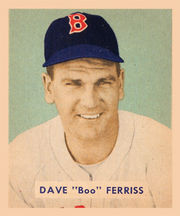 The Boston Red Sox signed pitcher Dave Ferriss as an amateur free agent during the 1942 season. He had previously been at Mississippi State University, where he had been the first player in school history to earn a full scholarship because of his baseball prowess. He pitched and played first base there in 1941 and 1942. He was assigned to the Greensboro Red Sox of the class B Piedmont League to beging his professional career and the righthander put together a 7-7 record with a 2.22 ERA. Dave then served in the Army Air Forces for 26 months from 1942 to 1945. He was discharged from the service shortly before the 1945 season due to an acute asthma condition.

Dave joined the Boston Red Sox to start the 1945 campaign and beat every team in the league, throwing shutouts at the New York Yankees and the Philadelphia Athletics the first time around on his way to a 21 and 10 record. Ferriss could also hit, as he was often used as a pinch hitter and had a .267 average that year.

But with the return of the regulars from the war to start the 1946 season, the jury was still out on the righthander from Mississippi. He responded in an even more spectacular fashion, winning 12 games in a row during one stretch, and was unbeaten at home, going 13-0, en route to a 25-6 record and an American League-leading .806 winning percentage. On May 26th, he one-hit the Chicago White Sox in the opener of a doubleheader. In the nightcap Emmett O'Neill held Chicago to two hits as Ferris and O'Neill tied a record set in 1934 by Paul and Dizzy Dean of allowing only three hits in a twin bill. Dave capped off 1946 by shutting out the St. Louis Cardinals on six hits in Game 3 of the World Series, but was not involved in the decision as the starter in the seventh and deciding game won by the Cardinals.

Because Dave, or "Boo" as he was sometimes called, had become the first pitcher to win at least 20 games in his first two years since Wes Ferrell of the midway through the 1947 season, he was just 12-11 that year and would win only 7 more games the following season. He made one final trip out of the bullpen in 1950.

After a few years as a pitching coach for the Red Sox (1955 to 1959), Ferriss, who attended Mississippi State University, was a longtime head coach at Delta State University from 1960 to 1966 and 1970 to 1988, in Cleveland, MS, where the one-time rookie sensation retired. He was a legend at Delta State, taking a program that barely existed and bringing the team to respectability. He died in Cleveland on Thanksgiving Day, November 24, 2016 at the age of 94.

He was inducted in the Mississippi Sports Hall of Fame in 1961. The annual award given to the top collegiate player in the state is named in his honor.

His nickname "Boo" had nothing to do with fans not liking him: he earned it as a child because that is how he mispronounced the word "brother".