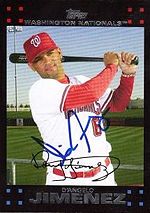 D'Angelo Jimenez is a player whose good defensive range and moderate hitting ability have been unable to find him a consistent employer. In seven seasons in the major leagues, he played for six teams.

Jimenez was signed as an amateur free agent by the New York Yankees in 1994, and was in their organization from 1995 through part of 2001. He was with the Columbus Clippers in Triple A in parts of five seasons, blossoming in 1999 when he posted hitting stats of .327/.392/.492, a highly-touted prospect often mentioned in the same breath with then up-and-coming Alfonso Soriano.

Jimenez was brought up by the Yankees for a cup of coffee at the end of the 1999 season and hit .400 in 7 games. Then a serious car crash almost curtailed his career - and his life - that offseason. He survived with a broken neck, and spent all of 2000 and into 2001 recovering. As questions abounded if he would ever return to form, the Yankees, in urgent need of relief pitching, traded him to the San Diego Padres for Jay Witasick on June 23, 2001. Two days later, he was a major leaguer again.

He hit .276 in 308 at-bats as a shortstop that season, and came back in 2002 to hit .252 as a second baseman and third baseman until he was traded to the Chicago White Sox in July. In both years with the Padres he drew more than the average number of walks and had excellent range in the field. He even appeared once on the mound, giving up no hits and no runs in 1 1/3 innings.

He played 27 games for the Chicago White Sox during the rest of 2002, hitting .287 with a .384 on-base percentage and good range in the field at second base and shortstop. He was also in AAA with the Charlotte Knights, hitting .280 with a .372 on-base percentage. The next season, 2003, he had 73 games with the White Sox before he was traded. In the 73 games, he had hit .255 and drew walks well, although his range at second base slipped to a bit below average.

He spent the rest of the 2003 season with the Cincinnati Reds, hitting .290 and playing second base. Cincinnati kept him for the whole 2004 season, the first time Jimenez had gotten over 350 at-bats with one team in one season. He hit .270 and drew enough walks to have a .364 on-base percentage, with good range in the field. The following year, 2004, he hit .229 in 35 games for the Reds and hit .278 in 90 games for the Chattanooga Lookouts, then became a free agent.

In 2006 he played 28 games in the majors, split between the Texas Rangers and the Oakland Athletics, hitting .183 between the two teams. He spent most of the 2006 with the Sacramento River Cats, hitting .304 with a .413 on-base percentage. The regular A's second baseman Mark Ellis had injuries, so Jimenez appeared in 6 postseason games with the A's, hitting .125. He was released by the team after the season.

In 2007, he joined the Washington Nationals as a free agent and split the season between Washington and AAA Columbus, which by now was Washington's top affiliate. In 73 games with the Nats, he hit .245 in only 104 at-bats. He played his final major league game on September 29th.

Jimenez was 1 for 3 with two walks as a bench player for the Tigres del Licey as they won the 2008 Caribbean Series.

Jimenez recorded the first hit in Citizens Bank Park in [2004 off Philadelphia Phillies pitcher Randy Wolf. It was a double. Jimenez drew seven bases-loaded walks in 2004, the second most in a season since 1957 (current through 2006).