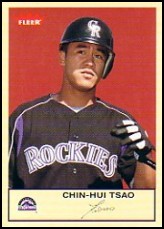 Chin-Hui Tsao pitched for Kaoping Fala of the Taiwan Major League in 1999 before signing with the Colorado Rockies.

On June 29, 2007, Tsao and Hong-Chih Kuo made history by being the first two Taiwan-born players to appear in the same game on the same major league team - the Los Angeles Dodgers. Tsao pitched four innings in the 2007 Asian Championship, striking out four and allowing three runs.

Tsao allowed two runs, 2 walks and one hit in 1 2/3 IP over 3 games in the 2008 Olympics for Taiwan, as one of their lesser hurlers. He was the second pick in the 2008 CPBL new player draft that December, chosen by the Brother Elephants.

In 2010, it was revealed Tsao had agreed to throw two CPBL games for gamblers. One was canceled due to a typhoon and the other game-throwing was canceled when not enough of his teammates agreed to go along. However, the revelations were enough to get Tsao banned from the league. His career appeared to be over at that point, and he settled into running a barbecue restaurant, although he also kept in shape. After being out of baseball for five years, he found out that the ban did not apply to Major League Baseball and in 2015 he was invited to spring training by the Dodgers, the last big league team for which he had played. He was assigned to the AA Tulsa Drillers at the end of spring, and after four games there, moved up to the Oklahoma City Dodgers of the Pacific Coast League. His ERA was 7.20 for Tulsa, but 3.86 in Oklahoma City, where he was 2-1 with 5 saves in 21 games. He received a call-up to the majors on July 8th.

He made his first major league appearance in 8 years for the Dodgers on July 10th and was credited with a win in a relief appearance against the Milwaukee Brewers, his first in over a decade. He took over for starter Mike Bolsinger in the 7th inning with the Dodgers down, 2-0, and allowed two hits but no runs. His teammates then rallied for 3 runs in the bottom of the inning and relievers J.P. Howell and Kenley Jansen closed out the win. It was the longest between major league wins since Johnny Lindell in 1942-1953.

Tsao is the uncle of Kuo-Hui Lo.