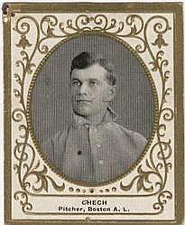 “Chech, who was only a fourth-rater with the Cleveland team, has developed into a star for Boston, and is pitching more consistent ball for the Hubites than Cy Young… Had anyone suggested last season to make an even trade of these two pitchers, he would have been considered ready for a lunacy court.” - Washington Post, May 14, 1909

With the Cincinnati Reds in 1905, Charlie had a very good rookie season. He led the National League in games finished with 13, appearing 39 times (25 starts) while recording a 14-14, 2.89 record. He made only 11 appearances in 1906 before being dealt to a minor league club in Toledo. He would resurface in 1908 with the Cleveland Naps and had a wonderful season, finishing 11-7 with a tidy little ERA of 1.74 in 27 games. He pitched 4 shutouts, including a four-hit gem against the Philadelphia Athletics in August, as the Naps went down to the wire with the Detroit Tigers, losing the pennant as the Tigers were not required to re-play washed out games, a rule that would soon be amended. Boston Red Sox owner John I. Taylor was thoroughly impressed, acquiring Chech and another pitcher of moderate success in exchange for the legendary Cy Young. He could not possibly live up to Cy's colossal skill, Washington Post praise be damned, returning to the minor leagues in July 1909 after a decent 7-5, 2.95 mark in 17 games.

Chech and Addie Joss may have been school buddies at the University of Wisconsin-Madison, Joss attending in 1899, Chech at various stretches between 1896 and 1904. Chech died in Los Angeles at the age of 59 in 1938.