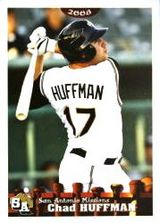 Outfielder Chad Huffman was selected by the San Diego Padres in the second round of the 2006 amateur draft. He was signed by scout Tim Holt and made his pro debut that summer with the Eugene Emeralds, hitting .343 with 17 doubles, 9 home runs, and 40 RBI while leading the Northwest League with a .439 on-base percentage and making the circuit's All-Star team. Late in the season, he was promoted to the Fort Wayne Wizards, for whom he appeared in 5 games.

Huffman was selected off waivers from the Padres by the New York Yankees at the end of spring training in 2010. He started the year at AAA Scranton/Wilkes-Barre, then got his first look at the majors in early June when the Yankees were hit by a rash of injuries to position players and had to strengthen their bench. He was hitting .279 in 53 games at the time of his call-up. He went 3 for 18, for a .167 average, in 9 major league games. He finished his AAA season hitting .274/.353/.410 in 104 games.

After the season, he signed with the Cleveland Indians and began the 2011 season with the Columbus Clippers. On April 21st, he had a career day, blasting three home runs and driving in at least one run in each of his six plate appearances, ending the day with a club-record 10 RBI. Columbus crushed the Louisville Bats 19-3 that day.

Huffman signed with the Chiba Lotte Marines for 2014. On Opening Day, he hit 6th and played left field. He drew a walk from Tadashi Settsu his first time up then struck out the next time plate appearances. He was replaced in left by Shoitsu Omatsu in a double switch.

Huffman returned to the majors on June 8, 2017, making his first appearance since 2010 as a pinch-hitter for the St. Louis Cardinals in a game against the Cincinnati Reds. He went 4 for 14 in 12 games in the majors that season.