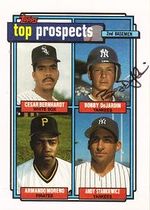 The son of Juan Bernhardt and nephew of Carlos Bernhardt, Cesar Bernhardt is a former second base prospect who played in the Chicago White Sox organization. During his best season, he was replaced briefly in the field by a sportswriter, Rick Wolff.

Following his playing days, it appears he remained in the United States, settling at one point in Indiana.