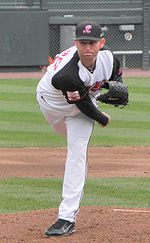 Carlos Gutierrez was a first-round draft pick in the 2008 amateur draft.

Gutierrez played basketball and not baseball until he was a high school senior. He was 6-2 with 2 saves and a 2.70 ERA as a senior. Moving on to college, he allowed nine runs in 10 innings as a freshman at the University of Miami. In his sophomore season, Carlos went 9-7 with a 4.40 ERA before injury derailed his season. He had Tommy John surgery and was redshirted, missing all of 2007. In 2008, he returned as a closer.

Gutierrez was the 27th pick of the 2008 amateur draft, taken by the Minnesota Twins; the pick was compensation for the loss of Torii Hunter to free agency. Carlos blew a save in Miami's first game of the 2008 College World Series, thanks to a 2-run error by Gutierrez himself.

Gutierrez was signed by scout Hector Otero and assigned to the Fort Myers Miracle as his first professional stop. He debuted on July 13th, striking out two batters among four he faced and allowing one hit. He went 3-1 with a save and a 2.10 ERA in 16 games but threw 7 wild pitches in 25 2/3 IP. He was the youngest member of Puerto Rico's team for the 2009 World Baseball Classic, 3 years younger than Geovany Soto.