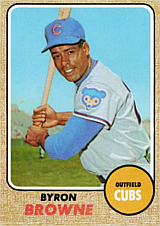 Byron Browne was a rookie outfielder with the Chicago Cubs in 1966, hitting 16 homers in 120 games. His only other 100 game season came in 1970 with the Philadelphia Phillies. Browne also played for the Houston Astros and the St. Louis Cardinals. He is the father of actor and former minor leaguer Byron Browne, Jr..

Browne, who played eight seasons in the majors, may have been a bigger star in a different era - he hit 148 home runs in the minors, thus showing that he could send the ball far. But his major league career was during the second dead-ball era, when hitting was at historic lows. The problem was also that he struck out a lot - a National League-leading 143 times in his rookie season, at a time when strikeouts were much frowned upon. The fact that, in spite of the strikeouts, he was a good offensive player as a 23-year-old rookie (he had a 104 OPS+), did not register with the Cubs. He hardly got a chance to play in 1967, getting only 19 at-bats in 10 games. The fact that he was also an indifferent defensive player probably also did not help his case, but he was still a deserving major league starter.

Browne was part of the infamous trade between the Phillies and Cardinals which triggered Curt Flood's lawsuit to challenge the reserve clause. Byron, Flood, Joe Hoerner and Tim McCarver were traded from the Cards to the Phillies in return for Dick Allen, Jerry Johnson and Cookie Rojas. Flood was not interested in leaving St. Louis, where he had put down roots over the previous decade, and refused to report to the Phillies, eventually suing Major League Baseball for free agency. The rest of the trade was allowed to go on, with St. Louis throwing a couple of prospects to replace Flood in the deal, and Byron got an opportunity to play semi-regularly for the Phils in 1970. Once again, he showed good power with 17 doubles and 10 homers in 270 at-bats. His batting average was only .248, and he struck out 73 times, but the positives once again outweighed the negatives, as he had an OPS+ of 105. He was used a bit as a pinch-hitter over the next two years, which were his last in the majors.