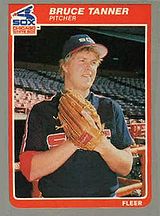 He started young in the major leagues, serving as batboy while his father managed the White Sox in the early 1970s. In college at Florida State University, he led the conference in ERA in 1983.

Bruce pitched 27 innings in the majors, with a record of 1-2. His only win came in his debut on June 12th against the Seattle Mariners. He went 6 2/3 innings, giving up 7 hits, 2 earned runs, walking 2 and striking out 3.

His brother Mark Tanner pitched in the minors.