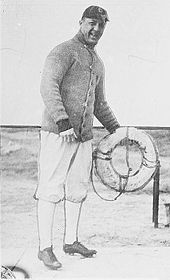 Brad was born, and died, in White Haven, PA, 110 miles west of New York, NY. He played in 1909-1910 for the Bridgeport Orators before getting purchased in August 1910 by the New York Highlanders but then sold to the Tigers. He did not appear in the big leagues with either team, and in 1911 was in the minors with the Toronto Maple Leafs.

With the Tigers in 1912, he was a backup catcher behind Oscar Stanage. Brad was one year younger than teammate Ty Cobb. After the Tigers, he spent all of 1913 and 1914 and part of 1915 with the Providence Grays (and apparently some time as well in 1915 with the Maple Leafs). He was up at the tail end of the year with the Giants. Notably, playing against the Boston Braves, an above-.500 team, Kocher went 4-for-5 with a triple on the last day of the regular season.

He stayed with the Giants in 1916, playing catcher behind Bill Rariden as the Giants improved their record over 1915. Brad was eight years older than young teammate High Pockets Kelly. In 1917, Kocher started a five-year stint with the Louisville Colonels and then went to the Toledo Mud Hens in 1922 to close out his pro playing career.