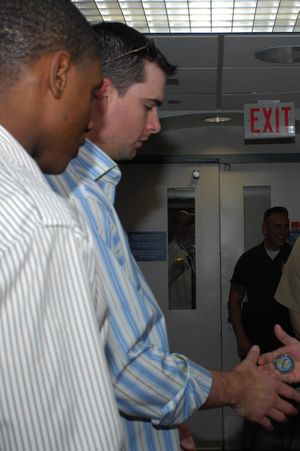 Pitcher Boone Logan was signed by the Chicago White Sox and scouts Paul Provas and Keith Staab as a 20th round pick in the 2002 amateur draft. He made his pro debut the following year with the Great Falls White Sox, the first of three seasons with the Rookie-level club. Logan struggled in 2003 and 2004, then dropped to low 3/4 arm slot in 2005 at the suggestion of Great Falls pitching coach Curt Hasler. After finishing the 2005 season in Class A Winston-Salem Warthogs, he made the jump to the majors in 2006 when he made the Sox Opening Day roster. He posted a 5.68 ERA in his first 12 contests in the majors before being demoted to the AAA Charlotte Knights. After going 3-1 with a 3.38 ERA and 11 saves at Charlotte, he rejoined the White Sox bullpen in September.

He spent most of the 2007 campaign with the Sox, going 2-1 with a 4.97 ERA in 68 games out of the bullpen. After spending the majority of 2008 with the Sox as well, he was dealt to the Atlanta Braves along with Javier Vazquez following the campaign. After the 2009 season, he was traded along with Vazquez again, this time to the New York Yankees.