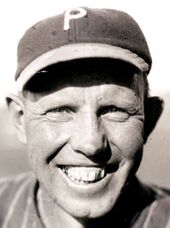 Bill Kenworthy was a popular player and manager in the Pacific Coast League from the mid-teens through the mid-twenties, where he was known as "The Iron Duke", and was a star of the short-lived Federal League in 1914 and 1915. He is noted in some baseball encyclopedias as "Duke" Kenworthy, but never used that nickname during his major league play.

Kenworthy started his professional career as a pitcher, but his hitting was good enough to merit a conversion to outfield play within five years, and his fielding skills caused him to be moved to second base the next season. His career began in 1907, pitching for Beaver Falls in the Western Pennsylvania League and in East Liverpool of the POM League. He moved up to the Zanesville Infants of the Central League the next season, and won 17, 24, and 22 games, respectively, in the 1908, 1909, and 1910 seasons. Becoming a part-time pitcher and part-time outfielder in 1911, he fashioned a 9-3 won-lost record while hitting .315 with the Western League champion Denver that won 111 games. Playing in Denver again in 1912, he hit .335 as a full-time outfielder and had a brief tryout with the Washington Senators that season, his first game coming in the game in which Walter Johnson's 16-game winning streak was officially stopped.

He played for Sacramento in the PCL in 1913, but jumped to Kansas City of the Federal League in 1914. That season, known occasionally by the nickname of "Judge Kenworthy" (a reference to the post-game "kangaroo court" held by the team after victories), he finished sixth in BA (.317), fifth in RBI (91), fifth in stolen bases (27), fourth in runs scored (93), third in SLG (.525), third in doubles (40), third in triples (14), and second in home runs (15), taking advantage of the 260 foot left field fence of Kansas City's bandbox ballpark. When the ballpark was reconfigured in the off-season following flood damage, Kenworthy's home run numbers declined precipitously, and a mid-season injury cost him enough playing time to keep him off the leader boards in 1915.

Following the Feds' disbanding, Kenworthy returned to the PCL in 1916, playing for Oakland, leading the league with a .314 batting average. Following the season, Kenworthy was named as part of an All-Star team that traveled to Hawaii for games. They played a number of games there against the all-black Twenty-Fifth Infantry Wreckers. Kenworthy faced Wreckers pitcher Wilber Rogan in four games, going six-for-sixteen (.375) against the future Hall of Fame Negro Leaguer.

Kenworthy began the 1917 season with the St. Louis Browns, but played only five games as a defensive replacement and pinch-hitter before being released and signed by Los Angeles in the PCL. As did many players during World War I, he missed the entire 1918 season, working instead in a San Francisco shipbuilding plant in lieu of being drafted. He returned to Los Angeles in 1919, but was traded to Seattle in the midst of his worst offensive season since converting from pitching, hitting only .227.

Kenworthy bounced back in 1920, hitting .313 for Seattle and hitting a career-high .346 in 1921. He was named manager in that latter season, but was involved in a controversy when the Portland team tried to sign him after the 1921 season. Seattle owner William H. ("Bill") Klepper was forced out near the end of the 1921 season, and as one of his last acts gave Kenworthy his release as a player and manager. Klepper then bought into the Portland team and promptly hired Kenworthy as his new manager.

Judge Kenesaw Landis investigated the transaction for improprieties, and suspended Kenworthy before the season began, pending further investigation. During the off-season, the Beavers traded Marty Krug to Seattle in exchange for Kenworthy's contract, hoping to ease the matter. Less than two weeks into the season, Landis again indefinitely suspended Kenworthy. Following Landis' investigation (his first involving a minor league issue), Klepper and Portland vice-president James Brewster were both declared ineligible to participate in PCL business, being allowed only to run the business aspects of their team. Klepper and Brewster both appealed Landis' decision unsuccessfully, but were still able to clandestinely continue to run the club as always.

Kenworthy, however, was effectively suspended from Organized Baseball for the remainder of the season, and from the PCL for the 1922 and 1923 seasons. He returned to baseball in 1923, managing the Columbus Senators in the American Association, and was eventually allowed to return to the PCL and manage Portland in 1924. During that season, he was involved in a fist fight with two San Francisco players, Dee Walsh and Eddie Mulligan, that made headlines and resulted in suspension.

After his playing career, he settled in Oakland, California, where he was a coach for the Oakland Oaks in the late 1930s and then was baseball coach for St. Mary's College in Moraga, CA until his death by drowning in 1950.