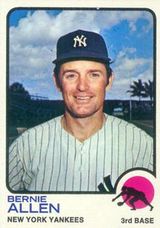 Bernie Allen played twelve seasons in the majors, mostly in the American League. He finished third in the 1962 Rookie of the Year voting.

Allen was born in East Liverpool, OH and was a top high school athlete in three sports. He visited Ohio State University but coach Woody Hayes felt he was too small to play football in the Big Ten. However, Purdue University was interested. As starting quarterback, Bernie eventually helped Purdue beat Ohio State.

He was in the minors only one season before coming to the majors with the 1962 Minnesota Twins, in the team's second season in Minnesota. He was the regular second baseman right from the start, appearing in 159 games, and showed excellent defensive skills. He finished behind Tom Tresh and Buck Rodgers in the Rookie of the Year voting. He suffered a serious injury in 1964 in a play involving Don Zimmer, who the similarity scores method considers the most similar player to Bernie. He continued in 1965 to be on the disabled list, eventually playing 19 games for the 1965 Twins and 41 games in the minors. In the minors, he had an injury and thus was not available to be called up for the 1965 World Series. Allen later played for the Washington Senators under manager Ted Williams and the New York Yankees under manager Ralph Houk. Except for his rookie year in the majors, he never had 500 plate appearances in any one season.

After baseball, he was a store manager and later a manufacturer's representative.