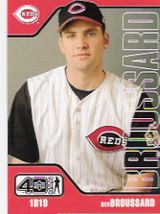 First baseman Ben Broussard played college baseball at McNeese State. As a senior, in 1999, he hit .438 with 27 home runs and 91 RBI. He holds the school's career records for runs scored, hits, homers, and RBI. Broussard was selected by the Cincinnati Reds in the second round of the 1999 amateur draft. He made his debut that year with the Billings Mustangs and hit .407 to win the Pioneer League batting crown. He was then promoted to the Clinton LumberKings, where he hit .550 with a pair of homers in 5 games. His third stop was the AA Chattanooga Lookouts. In 35 games at that level, he added 8 home runs and 21 RBI. Broussard returned to Chattanooga in 2000 and started the season hitting .353 before being sidelined by a broken wrist. He recovered the next season and won the Southern League batting title with a .320 mark. In the 2001 Baseball World Cup, he hit .174/.345/.174 for Team USA as starting first baseman, one of the weakest tourneys by an American. He began 2002 with the Louisville Bats, but was traded to the Cleveland Indians for Russell Branyan in June.

Following the trade, he played for the Buffalo Bisons for a time before being called up by the Indians and making his big league debut on June 22, 2002. He returned to Buffalo and was back with the Indians again in September. After suffering an injury in spring training, he began his 2003 season back at Buffalo. He was recalled by the Indians in May and soon became the club's regular first baseman. He started September with a 10-game hitting streak, but tailed off, hitting .106 over the remainder of the season. The next two years, he remained a starter at first base, putting up fairly consistent numbers in each season. In 2006, Broussard had his best year. He hit .321 with 13 homers and 46 RBI for the Indians before being traded to the Seattle Mariners in July for Shin-Soo Choo and Shawn Nottingham. With the Mariners, he hit only .238, but still ended the year with a career-best .289 average and 21 home runs. Through 2006, Broussard was a .333 hitter with the bases loaded, including 4 grand slams and 51 RBI. Broussard hit the first pinch-hit grand slam in Mariners history on April 21, 2007, taking Darren Oliver deep in the 8th inning of an eventual 7-6 loss to the Los Angeles Angels. 2007 would be his final productive season as a big leaguer, batting .275 in 97 games. He was dealt to the Texas Rangers in December for Tug Hulett and was released in May, batting .159 in 26 games. He spent time in several organizations in the minors but was unable to get back to the bigs.

Away from the diamond, Broussard sang and played the guitar. He released a self-titled album of original works in 2005 and a second album, Renovated, in 2009. Two songs from his debut album featured on A&E's popular reality program, Dog The Bounty Hunter. In 2018, he was appointed "Leadership development coordinator" for the Chicago White Sox.