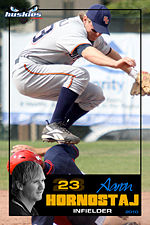 Aaron Hornostaj is a former minor leagur middle infielder who peaked at AAA with the San Francisco Giants.

He was a member of the Team Canada Junior squad from 1998-2000. He was drafted by the San Francisco Giants in the 34th round of the 2001 amateur draft as a draft-and-follow second-baseman. He attended Connors State College on an Academic Baseball scholarship in 2001-2002. 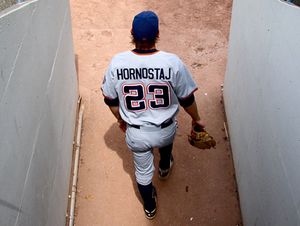 He spent some time with the Edmonton Capitals of the Golden Baseball League. In 2009 with Edmonton, he was in 76 games and had 43 RBI and a .280 regular season. Interestingly, he made the team as a walk-on at open tryouts and shortly became the everday playing shortstop.

He moved to the Rouen Huskies in Division Elite for the 2010 season. Also of note that year, he scored the 2,000th run in Rouen's history, off a Boris Marche hit on May 30th. Aaron earned the Best Hitter Award while batting .667 during the Finals leading the Huskies to win the French League Championship. He finished the 2010 year for Rouen with a .425/.489/.717 batting line, 6 home runs, 40 RBI, 33 runs and 18 steals (in 20 tries) in 29 games. He led the league in average (by 30 points), slugging (by 112 points), RBI (tied with Tim Stewart), sacrifice flies (7) and home runs (tied with Stewart). He was also second in OBP (trailing Ernesto Martinez), tied for 7th in hits, was 3rd in steals, tied for 10th in doubles (9, even with Sébastien Morgavi), 9th in runs and second in total bases (76, one behind Stewart).

Hornostaj has dual Canadian/UK citizenship, allowing him to play for the British National Team at the 2010 European Championship in Stuttgart, Germany. In that event, he was 0 for 3 with a walk for the Brits. He played winter ball in Australia in 2010, then worked for a training camp for youth to learn baseball skills in Moorabbin, Australia.

Aaron was the shortstop for the Valencia Astros in Spain's Elite Baseball League in 2011 (hitting .295/.398/.362 with 30 runs in 28 games and 14 steals in 17 tries). He tied Jesús Golindano for third in the league in steals. For 2012, he signed with Germany's Heidenheim Heidekopfe in the Bundesliga.

Another interesting note, in the 2011 European Championship Qualifiers, Hornostaj starred as the British shortstop and became the first ever batter in an international sanctioned baseball tournament in Israel. He went on to win the C.E.B. Best Hitter Award going 11 for 22 with two walks, two doubles, a triple, home run, 8 runs and 6 RBI in five games as Britain advanced to the 2012 European Championship. He led the Tel Aviv-based qualifer in slugging, hits, triples (tied), home runs (tied), total bases (7 more than runners-up Eitan Maoz and Aeden McQueary-Ennis) and runs (tied with Oren Gal), tied for second in doubles and was third in RBI (one behind Maoz and McQueary-Ennis).

Aaron will play for the Great Britain National Baseball team Sept 7-16 in Amsterdam for the European Championship and then in Regensberg, Germany for the 2013 World Baseball Classic Qualifier Sept 20-24.