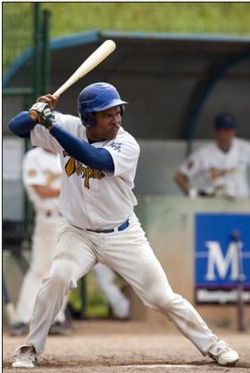 Ernesto Martínez is a catcher for the Templiers de Sénart in Division Elite, for whom he has won at least two home run titles. His son Ernesto Martínez Jr. was his teammate in the 2017 World Baseball Classic Qualifiers.

For the Templiers in 2007, Ernesto batted .257/.386/.413 and threw out 10 of 19 attempted base-stealers. In '08, he hit .300/.449/.486 with 5 homers, 35 walks and 35 runs in 44 games. Opponents were better running against him, going 22-for-28 in steal attempts. He tied for the Division Elite lead in home runs. He hit .235/.381/.471 for the Templiers in the 2008 European Cup in Regensburg. He was both hero and goat in the 5th/6th place game against Draci Brno, making two errors to let the Czechs rally to take the lead. He singled off former minor leaguer Jakub Toufar then scored the tying run in the 9th on a David Meurant hit, though. Then in the 11th, he reached on an error and came around on a Matthieu Brelle-Andrade grounder for the winning run.

Martínez was the top performer for Sénart in the 2009 European Cup, going 6 for 11 with three doubles. He was third in the Matino phase of the Cup in average, right behind Willie Vasquez and Max De Biase. His 3 doubles led the Matino round. Ernesto had 3 of the four Templiers hits in their crucial last-game loss to Draci Brno that put them in danger of being relegated out of the Cup. In 2009, he hit .379/.488/.682 with 19 RBI in 19 games in the Division Elite. He led the league with four homers, led in slugging (by .078), was second in average (.047 off the pace) and was 3rd in OBP. Had he played more often, he likely would have been among the leaders in more counting stats.

French statistics for 2012-2013 are unavailable online as of Aug. 2016. He played for the French national team in the 2013 World Baseball Classic Qualifiers, backing up Sneideer Santos at DH (Boris Marche and Andy Paz handled the catching). He was 0 for 2 with a strikeout and a double-play grounder, both facing Hein Robb, after replacing Santos in a 5-2 loss to South Africa. Peyrichou replaced him in the 10th.

In the 2014 French Division I, the old-timer hit .270/.411/.324, fielded .981 and threw out 5 of 9 attempted base-stealers. Having starred in the finale when his team won a Cuban title, he now starred in the finals as Sénart won it all. Just like in Cuba, his team had never before won the league championship. In game 3 of the best-of-5 series, he hit a two-run homer off James Murrey in the 1st and finished the day 3 for 5 with two runs and two RBI in a 5-4 win. During '15, he was a player-coach for the Templiers, now managed by another Cuban veteran, Rolando Meriño. Meriño and Martínez split the catching and Ernesto hit .308/.413/.385, fielded .979 and allowed 6 steals in 8 tries.

At the 2017 World Baseball Classic Qualifiers in March 2016, the 42-year-old was 9 years older than France's third-oldest player, Pierrick Lemestre, but over a year behind Samuel Meurant, the long-time French ace who came out of retirement for the event. Ernesto's son was a bench player on the team but Ernesto Sr. got the start at DH two of three games. He showed little signs of age, going 3 for 8 with two walks, a run and three RBI. He led France in RBI and was 3rd in OPS after René Leveret and Frédéric Hanvi. In a 5-3 upset of Spain (an entry in the previous World Baseball Classic) that gave France its first win ever in a World Baseball Classic Qualifier, he had a RBI single off Richard Salazar and a two-run single off Rogelio Armenteros for most of the French RBI. In the semifinals, he scored the tying run at 4-4 in the 5th on a balk from Angel Cuan of host Panama but France fell, 7-4.

see also www.youtube.com/watch?v=gql-LwwKBOo for his homerun in the 2002 Cuba final

This biographical article is missing the person's: birth place
Retrieved from "https://www.baseball-reference.com/bpv/index.php?title=Ernesto_Martínez&oldid=1013312"
Categories: