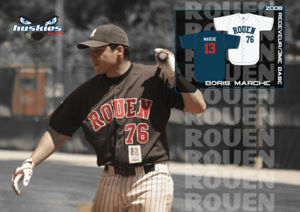 Boris Marche was a longtime catcher and captain of the Rouen Huskies as well as the French national team. His career spanned from 1998-2015.

Marche won eleven French Division 1 championships with the Rouen Huskies and was a member of the French National Team since 1999. His first European Championships came as an 18-year-old in 1999 backing up Jamel Boutagra at catcher. France won the bronze medal that year, their best finish ever in the Euros. Boris Marche was remarkably consistent both offensively and defensively during his time behind the plate, he spent his entire career with the Rouen Huskies, except for the 2001 season, where he played with Savigny where he won the French D1 title.

In the fall of 2001, Marche helped the French National Team finish fourth in the European Championships. He was 2-for-12 with 2 walks and 2 runs in the 2001 European Championship. He batted 2-for-16 with two walks for the French national team as a 20-year-old in the 2001 Baseball World Cup, backing up Boutagra at catcher once again. The following year, in 2002, he went to southern California where he attended Oxnard College and played baseball.

In the 2002 World University Championship, he was 3-for-19 with a double and had half of France's 6 RBI for the event. He made no errors at either third base or catcher.

2004 was a disappointing year for Rouen, as they lost to Montpellier two games to none in the finals of the French Division 1. In 2005, Marche along with then-newcomer Keino Perez teamed up to form one of the most successful batteries when the Venezuelan pitcher joined Rouen. Perez would later go on to become the all-time wins leader in French baseball history, with Marche behind the plate for many of those victories. In September 2005, Marche helped France improve from their 2003 seventh place finish, as "Les Bleus" finished sixth in the European Championships. He hit .200/.316/.200 in the 2005 Euros as France's starting catcher.

During his first few seasons with the French National Team, Marche split catching duties with Jamel Boutagra and Pierrick Lemestre. In 2006, Marche became the main catcher for "Les Bleus", and soon after, would be named captain of the team. For many years, Marche held the unique distinction of being captain for not only the national team, but his club team Rouen. The 2006 Rouen Huskies finished the regular season with a 27-5 record, and went on to beat Toulouse in the finals.

He batted .368/.486/.470 with 33 RBI in 31 games in 2007. He edged teammate Dany Scalabrini for the league lead in RBI. The Huskies took home the 2007 Challenge de France, later that summer, Rouen finished second to Kinheim in all of Europe, the best ever result for a French club team. The Huskies finished in first place in the regular season with a 20-4 record, and would meet Senart in the finals, where they beat the Templiers three games to two. 2007 marked the first year where Rouen won both the Challenge de France and the French Championship. Marche would lace up the spikes that September for team France in the 2007 European Championship, helping the squad finish fifth, their best showing since 2001. In the Euros, he hit third for France, going 4-for-19. He was 2-for-11 with 2 RBI in the 2007 European Cup.

Rouen finished 22-6 in the regular season, good for second place. In the finals however, the Huskies dominated, and beat Senart again three games to two.

In 2009, Marche would lead Rouen to a first place regular season finish with a 25-3 record. Rouen took home the annual Challenge de France and yet again participated in the European Cup. March batted .320 (32-for-100) with 22 RBI and 6 stolen bases. That fall, Rouen topped Savigny three games to one to claim the French title. Boris provided expert analysis during the 2009 World Series for France 24, a French news channel.

In 2010, Marche's average slipped to .267 (23-for-86) however he still finished second on Rouen with 21 RBI in 24 games played, just behind Aaron Hornostaj who had 23 RBI. He delivered the hit that allowed Aaron Hornostaj to score Rouen's 2,000th run. Rouen would meet Savigny in the finals yet again, and yet again the Huskies would beat the Lions three games to one. That fall, Marche would suit up for the French National Team in the 2010 European Championships, where France finished in sixth place.

In 2011, Rouen began an especially dominating three year stretch that would see them take home both the Challenge de France and the French title for three consecutive seasons, including a trip to the Final Four in Nettuno, Italy in 2012. For the 2011 campaign Marche batted .333 (32-for-96), leading Rouen with 23 RBI and stealing 4 bases. That May, Marche would form a new battery mate, French-American pitcher Owen Ozanich. The two worked together for five years with Rouen and the French National Team until Marche's retirement following the 2015 season. Rouen trailed Montpellier two games to none in the 2011 finals before rallying to win three at home and claim their eighth French title.

Prior to the 2012 season, Marche travelled to Japan to take part in an intense spring training in preparation for the 2012 season. The Huskies reached their peak both talent wise and results wise that summer. Keino Perez took over as manager, replacing Robin Roy, and the Huskies reinforced an already strong team with a solid recruiting class of pitcher Chris Mezger, infielder Ethan Paquette and utility man Mathew Smith. Rouen dominated the French D1, going 26-2 in the regular season, sweeping the Challenge de France, and beating Senart on the way to participating in the Final Four. Marche was his usual self, batting .287 (29-for-101) with 21 RBI in 27 games played.

In the fall of 2012, Marche participated in the European Championships held in Holland, where France finished a disappointing eighth. From there Boris and his teammates flew across the Atlantic to take part in the World Baseball Classic Qualifiers in Jupiter, Florida. Marche would help tutor a young catcher by the name of Andy Paz, who would take over the starting catching duties which for many seasons were Marche's.

2013 would see Rouen yet again finish first in the regular season with a 24-4 record. In May the Huskies claimed the Challenge de France where Marche was tournament MVP. Later that summer Rouen would again top Senart to take home their tenth French title, with Marche putting up his usual numbers: .374 (40-for-107) with 16 RBI and 3 steals. Marche would become a father for the first time in late 2013.

In the spring of 2014, Marche and his national team teammates held spring training in Arizona under then head coach Eric Gagne in preparation for the 2014 European Championships. Back in France, Marche and Rouen got off to unusual slow starts. Marche rebounded well, and with a very strong second half to the season, finished at .396 (36-for-91) with 21 RBI in 26 games played. Much, however could not be said about the Huskies, as Rouen failed to win either the Challenge or the French title for the first time in years. In September of 2014, Marche and the French National team made some noise by beating the Netherlands and finishing sixth in the European Championships. Marche batted 2-for-7 (.286) backing up Oakland Athletics prospect Andy Paz behind the plate.

Boris Marche played his final season in 2015. After splitting time behind the plate in the regular season with Dylan Gleeson and David Gauthier, Marche reclaimed his place behind the dish and in the heart of the Rouen lineup as the Huskies claimed their eleventh French title in September 2015. The long time captain of the Huskies appeared in 29 games in 2015, batting .353 (30-for-85) with 15 RBI and 3 steals. Marche caught all four games of the French Series, which the Huskies won three games to one against Montpellier. He caught the finals MVP Owen Ozanich in his final game in a Rouen uniform, a 6-4 victory at Rouen's Terrain Pierre Rolland.

Boris Marche leaves behind a legacy of winning, sportsmanship and hard work. He retires a 12 time French D1 champion, 11 titles with Rouen and one with Savigny. He appeared in 558 games, batting .308 (597-for-1,937) with 422 runs scored, 136 doubles, 27 triples, 3 homers, 486 RBI and 65 steals. He is first or second in almost all career offensive statistics in Huskies history. The Huskies retired his number 13 during the 2016 season.