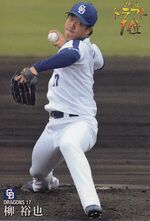 Yuya Yanagi has won an ERA title in Japan.

Yanagi moved far from home for high school so he could attend Daisuke Matsuzaka's alma mater. [1] He was on Japan's collegiate All-Star team and won MVP in their matches with the US. [2] In the 2016 Haarlem Baseball Week, he beat Taiwan by fanning three of six batters and allowing no one on, beating En-Sih Huang. He lost the title game to the Netherlands, undone by Japanese errors, as Tom Stuifbergen and his bullpen shut out Japan. [3] The Chunichi Dragons and Yokohama BayStars both took him with their first pick of the 2016 NPB draft, Chunichi winning the lottery for his rights. [4]

In 2020, he fell to 6-7, 3.60 while battling injury but fanned 88 in 85 IP. [7] He started 2021 NPB All-Star Game 2 for the CL. He retired Hiroto Kobukata and Takashi Ogino, gave up a hit to Hiroaki Shimauchi and then retired Takeya Nakamura. In the second, Brandon Laird flew out and Sho Nakamura whiffed but Yutaro Sugimoto homered to tie it at one. He retired Ryoya Kurihara to end the inning. In the third, he was relieved by Masato Morishita. [8] He was 11-6 with a 2.20 ERA and 1.01 WHIP for 2021. He led the CL in ERA (.28 ahead of runner-up Aoyagi), tied Yuki Takahashi for third in victories, tied Haruto Takahashi for the most shutouts (2) and easily led with 168 strikeouts (30 more than #2 Shosei Togo). [9] He won the Gold Glove and the Best Nine, and was 15th in voting for the 2021 Central League Most Valuable Player Award (between Yasunobu Okugawa and Ryuta Konno). [10]