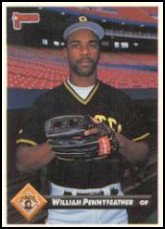 Outfielder Will Pennyfeather began his career when he signed as a non-drafted free agent with the Pittsburgh Pirates in July of 1988, and played parts of the 1992, 1993 and 1994 seasons with the Pirates at the Major League level, collecting 9 career hits in 46 at-bats. During his career, the former Syracuse University football standout also played in the Cincinnati Reds, Anaheim Angels, and Los Angeles Dodgers organizations, reaching the triple-A level in seven different seasons.

Pennyfeather spent 2005 with the Bridgeport Bluefish of the independent Atlantic League. He later played for the Newark Bears of the same circuit. He joined Long Island Ducks pitcher Tim Cain and Bridgeport Bluefish outfielder Angel Espada as the only players who played in the Atlantic League every year from its 1998 inception until 2006. Both Cain and Espada then outlasted him by one season. The Newark Bears named him their 2006 Player of the Year and he then retired at the end of that season.