Wes Kingdon did very well in his one season in the majors. He posted a line of .324/.410/.471, well above average, for the 1932 Washington Senators, a team which went 93-61. His manager was Walter Johnson, and he was one year older than teammate Heinie Manush. Apart from his time in the majors, he had 20 years in the minors, playing mostly shortstop.

Wes was on base during a controversial play on July 4, 1932. Runner Carl Reynolds slid hard into home plate and catcher Bill Dickey. Dickey. who had been "knocked out" in a similar play the day before, slugged Reynolds. Dickey received a 30-day suspension. Source: SABR article [1]. 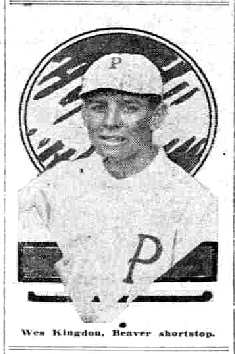 Kingdon with the Portland Beavers in 1920.