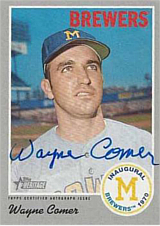 "I've had the feeling for some time now that Wayne Comer and I don't get along. I can tell because every once in a while he says about me 'Get him the [EFF] out of here.'" - Jim Bouton, Ball Four

Expansion blessed Wayne Comer with his lone full season in the bigs. He led the doomed Seattle Pilots in runs scored (88) while leading the junior circuit in double plays turned by an outfielder during an 147-game, .245/.354/.380 season in 1969. He never appeared in more than 90 games in any other year (five seasons between 1967 and 1972), though he did win a World Series ring as a backup outfielder with the Detroit Tigers in 1968. Delivering a pinch hit single off Joe Hoerner of the St. Louis Cardinals in Game 3 of the World Series left him with a career Fall Classic batting average of 1.000.