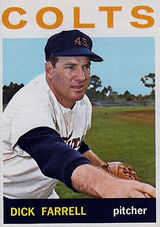 Pitcher Dick "Turk" Farrell was born and grew up in Boston, MA where his father was a grave keeper and his mother was a recent immigrant from Ireland. He caught polio at age 2 and until the age of 6 had to wear leg braces. He ended up with a left leg slightly shorter than his right and walked with a slight limp the rest of his life. In spite of the handicap, he was an outstanding athlete at St. Mary's High School in Brookline, MA where he played basketball, football and baseball although he was mediocre student.

After graduating from high school, Farrell was signed by the Philadelphia Phillies as an amateur free agent. He used part of the $5000 bonus to pay for his mother to visit her relatives back in Ireland for the first time in twenty years. The nineteen-year-old was assigned to the class A Schenectady Blue Jays where over a two-year span (1953-1954), he built an 18-18 record and a 3.30 ERA. He spent 1955 in the International League with the Syracuse Chiefs, going 12-12 with a 3.94 ERA and in 1956 he was with the Miami Marlins, going 12-6 with a 2.50 ERA.

Turk got a late-season look by the Phillies in 1956 and lost his only decision, but set the groundwork for a 14-year run in the major leagues. Turk was one of the young Philadelphia Phillies pitchers of the late 1950s, along with Jack Meyer and Jim Owens, dubbed the "Dalton Gang" for their fun-loving late-hour escapades. It was once said of Farrell by a teammate, "When he loses, he loses his temper, but when he wins he's the life of the party." After one tough defeat he broke a mirror with his fist in a Milwaukee, WI bar explaining, "I looked in the mirror and didn't like what I saw so I threw a punch." He was $250 by manager Eddie Sawyer for "conduct unbecoming a ballplayer" for that stunt.

Phillies fans liked what they saw of the 6'4" hard-throwing rookie right-hander in 1957 when he was 10-2 with 10 saves and a 2.38 ERA in 52 appearances out of the bullpen. On September 3rd, Farrell was the winning pitcher for the Phils in the last of fifteen home games the Brooklyn Dodgers played at the Jersey City, NJ Roosevelt Stadium, 3-2 in twelve innings. He pitched 2 innings in the 1958 All-Star Game, striking out four batters, including Ted Williams. He went 8-9, 3.35 with 11 saves that season. After an off-year that saw him briefly return to the minor leagues in 1959, he bounced back to go 10-6, 2.70 with 11 saves in 1960. "Turk" was then traded to the Dodgers early in 1961.

Farrell was then selected by the Houston Colt 45s in the 1962 expansion draft and converted to a starter. He pitched well but suffered "tough defeats" for the first-year club, because of lack of run support, as he was 10-20 in 1962 despite an ERA of 3.02 - one of the best ever for a pitcher that lost that many games. His first appearance for the new team was a relief appearance however, as he earned a save in pitching the 9th inning of a 2-0 shutout of the Chicago Cubs started by Hal Woodeshick on April 11th. He was named to the National League team for both All-Star Games played that year, surrendering a three-run homer to Rocky Colavito in the second of these. In spite of three seasons of making the roster for the Midsummer Classic, and three others of pitching 200 or more innings, his career best for wins was 14 in 1963. In 1965, he started the first-ever game played in the newly-opened Astrodome, an exhibition contest against the New York Yankees. He surrendered a home run to Mickey Mantle for the Yankees' only run, the first homer ever hit indoors.

After five seasons with Houston, Farrell returned to the Phillies to wind down his major league career, working in 150 more games out of the Phils' bullpen from 1967 to 1969, finishing with a major league record of 106-111 plus 83 saves and a 3.45 ERA.

Turk had spent a total of 19 seasons in pro baseball and his minor league stats show a 46-39 record with a 4.04 ERA. Farrell was now 37 years old and decided to move on to other things.

Turk then found employment with Houston-based construction company Brown and Root. He was working on an offshore oil rig off Great Britain in the North Sea when he was killed in an automobile accident in Great Yarmouth, England, on June 10, 1977, at age 43.

Farrell is the biological father of Richard Dotson, something which was only revealed decades after his death through genetic testing.