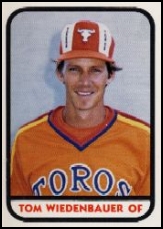 Tom Wiedenbauer had an excellent .667 batting average in his major league career of 6 at-bats at the tail end of the 1979 season with the Houston Astros. He starred in two sports at Sahuaro High School, and played in the minors at Covington and Tucson.

He lived in the same town as J.R. House, and was instrumental in signing House to an Astros contract.

Wiedenbauer's son, lefthanded pitcher John Wiedenbauer of Seabreeze High School in Daytona Beach, FL, was drafted by the Astros in the 24th round of the 2006 amateur draft. After attending college, he was drafted in the 2010 amateur draft by the Los Angeles Angels and began his career with the AZL Angels.

Tom is not to be confused with Tom Niedenfuer, a pitcher who broke into the majors in 1981.