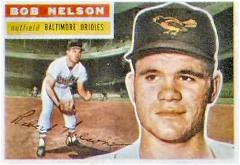 Eighteen-year-old Tex Nelson was signed by the Baltimore Orioles to a $40,000 bonus contract right out of high school in Dallas, TX, on June 20, 1955. The teenage phenom, who was hailed as the "Babe Ruth of Texas," did pick up his first major league base hit off Bob Feller, but only hit .205 with no home runs in 79 games for the Orioles from 1955 to 1957. Sadly enough, this would be the extent of the young outfielder's time in the major leagues and an argument can be made that the young man was the victim of the bonus rule that was in effect at this time.

Tex, or Bob as he was also known, spent the next five years in the minors but never came close to getting a second chance at the major league level. Sent to the San Antonio Missions of the Texas League and then to the Vancouver Mounties in 1957, Tex had a better outlook as he hit .301 with 5 home runs in 49 games, between the two teams. In 1958 he hit .280 with 11 homers in a 96-game dual season with the class B Wilson Tobs and the AA Dallas Rangers.

Tex then returned to Dallas, TX where he was employed with the East Texas Motor Freight Company.