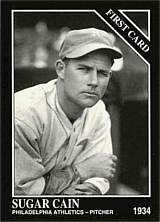 Sugar Cain pitched seven years in the majors, exclusively in the American League. He won 15 games in a season split between the St. Louis Browns and Chicago White Sox in 1936 and was a 13-game winner for Connie Mack's Philadelphia Athletics in 1933. His downfall was an almost complete lack of control, walking 569 batters in 987 1/3 innings, with four seasons of more than 100 walks (including a league-leading 123 between the A's and Browns in 1935).

Cain pitched fourteen seasons professionally, spending time between 1930 and 1943 in the minors, going 16-5 for the minor league Baltimore Orioles in 1932 to earn his big league look. He later managed the 1948 Vidalia-Lyons Twins.